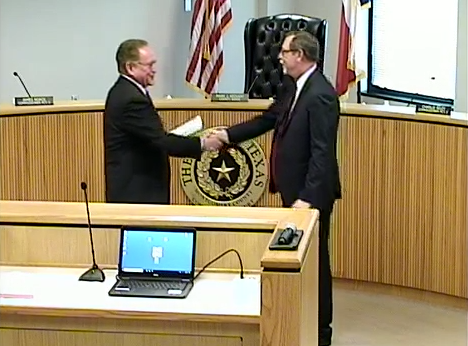 B.D. Griffin first joined the Montgomery County Attorney’s Office in 2013 as the Chief of the Real Estate Division. Then, in 2015, Lambright named Griffin as his First Assistant County Attorney. Griffin is a Board Certified attorney in Commercial and Residential Real Estate Law, but also has experience in government affairs, and other fields.

Precinct 3 Commissioner James Noack made the first motion, explaining the legacy Lambright left behind as County Attorney, “He led his office with duty and strength and honor and commitment to both the men and women that worked with him and the taxpayers of Montgomery County.”

“I think it’s a great honor to have B.D. Griffin sworn in as the new County Attorney,” said Commissioner Noack. “He trusted you, we trust you, and I think there’s not a better person we could be putting in the office.”

Commissioner Mike Meador seconded Noack’s motion to appoint Griffin, stating, “We know that you’ll do a great job. We know your work ethics, your integrity, and I think you will do great.”

Precinct 4 Commissioner Metts agreed with the appointment, stating, “I appreciate what you’re doing, you and I both know your family has a long history here. We’ve done business in the past, and we know that you will continue to do well.”

Griffin was immediately sworn-in by County Judge Mark Keough during Commissioners’ Court. Afterwards, Griffin provided a few words of thanks and humble praise to his predecessor.

“Thank you for the confidence you’ve shown in me and the rest of the County Attorney’s staff in appointing me, it is a tragic and unforeseen event which brings us to this place. JD was truly a great public servant, and has been and will be missed” said Griffin. “I am confident that I and the rest of the office are ready, willing, and able to address the issues, meet the challenges, and embrace the resulting opportunities that Montgomery County and the County Attorney’s Office will have now and in the near future.”

Then, Griffin made his first action as County Attorney known to the court: He reduced his own salary as County Attorney. Griffin stated, “It’s a very demanding position, and each and every one of my predecessors has done his part to further and enhance the office and aid Montgomery County. My predecessors earned every penny of their compensation, and more.”

“However, due to several factors in the past, the compensation of the office increased faster than the compensation of other elected legal officers and officials. So, I think now is an appropriate time to bring the salary of the County Attorney into line with the other elected legal officers,” said Griffin. “I am therefore going to reduce the County Attorney’s salary to that of the County Court at Law judges’ [salary].”

According to Griffin, the salary is an immediate reduction of approximately a $22,400, and is effective immediately.

The entire moment was bittersweet, with those in attendance not only appointing a new and dedicated individual to fill the remaining term of Lambright, but remembering J.D. Lambright for his lengthy service to Montgomery County.