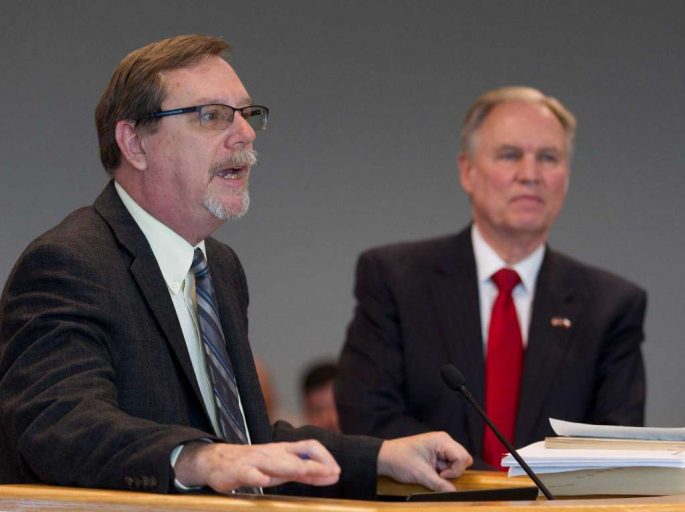 Conroe, March 15 – At its regular meeting on Tuesday, March 19, 2019, at 9:30 a.m., the Montgomery County Commissioners Court will appoint First Assistant County Attorney BD Griffin to succeed beloved Montgomery County Attorney JD Lambright, who passed into the arms of the Lord on Saturday, March 9, after a brief battle with cancer and complications therefrom. Griffin has served as Lambright’s “right hand man” since January 1, 2013.

Precinct 3 County Commissioner James Noack has placed an agenda item for the March 19 meeting on the agenda. This newspaper has confirmed that there is broad, if not unanimous, support for Griffin’s appointment to succeed the very popular Lambright.

Griffin provided an exclusive interview with The Golden Hammer yesterday afternoon. “It’s bittersweet. I’ve lost a good friend and we’ve all lost a great public servant,” Griffin said. “This was a very unfortunate thing to have to happen to our community.”

The likely next County Attorney added, “I’m the right person and the most qualified. Our office is in good situation to carry forward, thanks to JD’s great leadership, and to do what needs to be done. We have a lot of issues that will require commitment and expertise.”

Lambright named Griffin his First Assistant County Attorney in 2015. Griffin has continued to manage the Real Estate Division of the County Attorney’s Office as well. As the lead real estate attorney for the County government, Griffin has been responsible for legal issues pertaining to roads, subdivisions, ordinances, land use, eminent domain, sales or other dispositions of real estate, and acquisition and leasing of real estate.  He also represents Montgomery County in state and federal litigation involving real estate, land use regulation and flood plain enforcement.

Griffin, whose legal name is Benjamin Devane Griffin, is a life long citizen of Montgomery County whose family has lived in this area for well over a century. The Texas Bar admitted Griffin to practice in 1984. He also has attorney admissions before the United States Court of Appeals for the Fifth Circuit as well as several of the United States District Courts in Texas.

Griffin is a double-board certified attorney in the fields of Commercial Real Estate Law and Residential Real Estate Law by the Texas Board of Legal Specialization. He became a board-certified attorney in 1997. Griffin is also a member of the Real Estate, Probate and Trust Law Section, the Litigation Section, and the Government Law Section of the State Bar of Texas. He served as President of the Montgomery County Bar Association from 1994 to 1995.

Griffin spoke fondly of his years at Trinity University, which regularly ranks as one of the strongest liberal arts schools in the United States. “When I was at Trinity, we had the largest pipe organ in Texas with seventy-five hundred pipes and one hundred and eight ranks.”

Griffin said unequivocally that he is “Pro-Life” and that he considers himself “a conservative.” His work has First Assistant County Attorney has shown his commitment to open government and governmental transparency.

While Griffin believes that tollroads “can be a tool used in the proper place and time, it’s a policy decision whether or not to use them.” Griffin confirmed that he agrees with 2018’s Republican Primary Proposition 2 where 91% of voters stated that citizens should have the right to vote for or against tollroad projects before government funds or constructs them.

He said he doesn’t anticipate any major policy changes in the County Attorney’s Office, although “I will probably reorganize the office somewhat to make it more accessible to clients.”

Griffin said his primary goal as Montgomery County Attorney would be “to provide the highest quality representation to the County and to protect the citizens’ interests.”